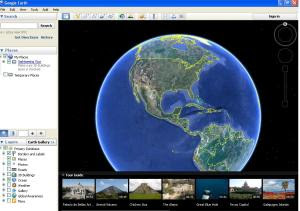 Yeah, I said Google Earth. For research. What do I know about that? Well, not to brag, but some people may even consider me a bit of an expert on research. Either that, or I completely fooled the staff putting together the Writer’s Guide to 2011 – in which I am quoted numerous times in the chapter titled “Making the Most of Research with Technology.”

But enough about me. Let’s talk some more about me.

I decided, for some reason I cannot explain, that the sequel to Lust for Danger HAD to contain a scene in a skyscraper next to the Danube River in Vienna. Keep in mind, I write faction, so that building had to actually exist. I asked a number of people, and they couldn’t think of one. So, I turned to Google Earth. I scanned along the banks of the Danube until I saw a long shadow: from a skyscraper. Voila!

But that’s not all. Google Earth does SO much more than let you look down from a satellite.

To read the rest of this article, please click here: http://www.indiesunlimited.com/2012/12/11/author-tools-google-earth/
Posted by K.S. Brooks at 9:24 PM